by Danielle Collobert; translated from the French by Nathanael 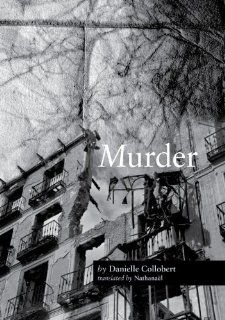 Originally published in 1964 by Éditions Gallimard while Collobert was living as a political exile in Italy, this prose work was written against the backdrop of the Algerian War. Uncompromising in its exposure of the calculated cruelty of the quotidian, the accusations have photographic precision, inculpating instants of habitual violence.

Danielle Collobert (1940-1978) was a French poet, author, and journalist. Born into a Breton family active in the Resistance during the Second World War, she killed herself on July 23, 1978 in a hotel room on the rue Dauphine in Paris. At 19 she abandoned her university studies and moved to Paris, where she began writing short poems and texts that would three years later be a part of this book.