Interested in making yourself a member of one of the eBook subscription services described in the article? Read on to learn more about what each service brings to the table.

Scribd: Probably the closest any of the three big subscription services come to being the Spotify for eBooks, Scribd gives readers access to its entire library of books for just $8.99 a month. Though the service doesn’t have a huge selection yet—especially not of books or authors whose names you will recognize right away—the Scribd website is designed in a helpful enough fashion that it will at least be able to distract you from its limitation.

Right on the homepage, Scribd editors give readers a slew of different reading recommendations, giving you genre options to choose from (pop culture, suspense, sci-fi or fantasy, romance, etc.) and even providing a section called “Scribd Selects,” which supposedly highlights the best new must-read titles on the service. Best of all, you can try it out for a month for free.

Oyster: Launched just last fall, Oyster definitely takes more than a little bit of inspiration from Scribd as far as web layout and customer generation is concerned. Not only does the site boast a similarly gorgeous layout to Scribd, but it also uses the same “one month free” promotion to get readers through the door. For how new it still is, Oyster has an impressively fleshed-out catalog, and you will see numerous recognizable authors, titles, and book covers from the first time you browse the site. The service also splits up its reading offerings into helpfully curated lists, from a category list loaded with Newbery Award honorees to a cultured selection of Pulitzer Prize winners.

Entitle: At the moment, Entitle is probably the least impressive of the three subscription services. The site layout is a bit more pedestrian than the other two services on this list, and the rules and regulations ($9.99 for any two eBooks, but you get to keep the files if/when you cancel your subscription) aren’t as clear-cut. With that said though, Entitle is still worth a look, largely because it boasts titles that you won’t find on either of the other services, from the Steve Jobs biography to recent bestsellers like Jess Walter’s Beautiful Ruins.

Could digital book publishing learn a thing or two from the music industry?

Want to know where book publishing is headed? Just look at the music industry.

There have always been parallels between the publishing and music industries, from the production and distribution models to the way earnings are split between authors and publishing companies or between bands and record labels. In recent years, however, the validity of the above statement—that the publishing industry is mirroring the movements of the music industry on a four or five-year delay—has grown in spades. With tablets, the publishing world got their iPod, and in eBooks, it found its version of MP3 files.

Today, both industries have thoroughly digitalized themselves, a fact that has made it easier than ever before for authors and publishing companies to get books out into the marketplace. After all, the old models—the huge production runs, the distribution models, the big box bookstore marketing strategies—have been rendered all but obsolete by the eBook. Nowadays, a book can be produced, published, marketed, and read all with the click of a mouse and a flourish of a few keyboard keys. With this transition, the cost of producing a book and seeing it through to the marketplace has decreased drastically.

Unfortunately for publishers, the value of the product, of the book itself, has decreased also. This phenomenon was to be expected. When things moved in a digital direction for the music industry, album sales tanked because many consumers no longer saw the value in buying the product that was being marketed to them. They liked the convenience of digital music, so they consumed it, but they never saw the same value in a folder of digital files as they ever saw in a physical CD or vinyl record. Because of this fact—and because digital files are inherently more open to reproduction than physical products—the music industry essentially began cannibalizing itself with piracy. Luckily for the publishing world, eBooks haven’t quite caught on in the same fashion that digital music did, which in turn means eBook piracy is not as big of a problem as music piracy is.

However, the fact remains that many readers still don’t see much value in paying full price (or near-full-price) for an eBook. They like the convenience of loading books onto a slim and sleek device and accessing them from anywhere, but for the most part, the majority of readers would much rather have physical copies of the books they buy.

So what’s the solution? Or rather, does the publishing industry even need a solution at this point? With eBooks doing well enough to be worthwhile and print books still demanding a lot of consumer interest, most publishing companies, large and small alike, are in a pretty sweet spot as far as content goes.

However, what these businesses do not want to have happen is a scenario where they are racing to catch up with technology instead of embracing that technology early on and controlling its narrative. If any lesson can be learned from the music industry, it’s this one. Record labels fought for years against downloading and digital music, and by the time they finally embraced it, with the iPod and iTunes, piracy had already taken root. By pushing eBook formats, most publishers are already ahead of the curve compared to where the music industry was at a comparable point on its tech timeline. The key going forward, of course, is for the publishing industry to stay ahead of the curve.

Which means that, yes, there does need to be a solution, a next step in getting readers to embrace eBooks in new and exciting ways. Luckily, that answer can also be provided by the music industry, in the form of subscription services. Streaming music services like Spotify, Rdio, and others have been able to successfully get listeners to pay monthly subscription fees in exchange for unlimited music access. With Spotify, for instance, music fans buy themselves monthly access to a massive music library. This library can be accessed on a whim, with listeners specifically selecting the albums, songs, or artists they want to hear when they want to hear them, just like they would on an iPod. Best of all, the whole thing costs just $9.99 per month, has no advertisements, and is supported by any device that can access the Internet. 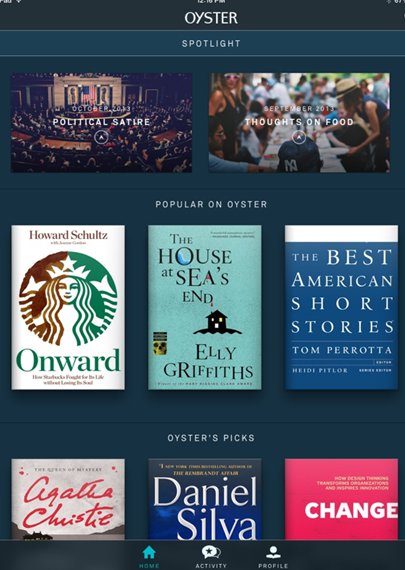 Of course, a subscription model for eBooks wouldn’t be quite the same as one for music, but the basic groundwork—the affordable monthly fees, the access to a wide library of content, etc.—would be similar. And already, services are taking a stab at filling the eBook industry’s subscription-based void. Scribd, Oyster, and Entitle are three of the first companies to make strides in this largely uncharted territory, and they are all doing it in different ways. Scribd, for instance, kicked its user base up a few notches last December, buying the independent distribution platform known as Smashwords and instantly grandfathering the imprint’s 70,000 authors in with free one-year subscriptions. Entitle’s big claim to fame is its access to the entire Simon & Schuster catalog, while Oyster is intriguing for switching up its pricing structures based on how many books its users want to read per month.

All three services have eBook libraries spanning different sizes and containing different books, and the pricing structures also vary across the board. As of yet, none of these services have really emerged as big publishing industry players, mostly because their book catalogs are still spotty at best. However, all three of them are approaching eBook distribution in new and interesting ways, and with a bit of collaboration from both independent and big-name publishing houses (read: willingness from publishers to license their books for subscription services), any one of them could pave the way to a new sort of golden age for readers.