Memoir Tracks the Fascinating Life of a Punk Community Celebrity 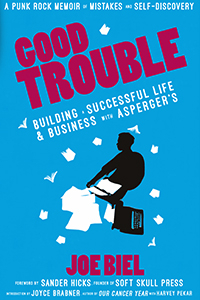 To the average person, the name "Joe Biel" might not mean a whole lot. He isn't a movie star. He isn't the frontman from a famous rock band. He's made films, but you've probably never seen any of them. He isn't a politician or a late night TV host or even a YouTube star. He certainly isn't a Kardashian. By most benchmarks of what constitutes modern fame, Joe Biel doesn't pass the test. And yet, in the punk underground community, Biel might just be a hero. A longtime "zinester," Biel is the founder of Microcosm Publishing—an independent publishing company that has been publishing zines, pamphlets, books, and other materials since 1996. According to ZineWiki, Microcosm's mission statement is to "teach self-empowerment to disenfranchised people and to nurture their creative side." That certainly sounds like a punk rock ethos.

For those who are unaware, a "zine" is an extremely limited run, small circulation publication created and distributed within the punk, underground, and DIY communities. Zine is short for "fanzine," and many zine publications are concerned largely with music or bands. However, punk rock is not the only subject that has defined zine culture over the years. On the contrary, zines have covered everything from politics to art to film to fashion to gender issues. There are rarely any editorial guidelines to these publications, which means they don't only feature journalistic content, but also art, fanfiction, poetry, cartoons, comics, and virtually any other type of expression that can be put on a page. Perhaps most importantly, the majority of zines aren't even copyrighted, since copyright laws tend to clash with the anarchist beliefs of most punk movements.

From the very first lines of the preface, it's clear that Biel is a terrific writer with a sharp authorial voice. Biel knows how to conjure up the feel of a time, place, and emotion—a skill no doubt born from his years working in zines. Those first few pages find Biel broken and down on his luck: he's 30 years old, broke, divorced, suffering from seemingly inexplicable injuries, wondering why all of his friendships and relationships turn to dust, and in the midst of a recession that seems poised to destroy the business he started building more than a decade earlier. Then, after a meeting with his therapist, Biel makes a startling self-discovery: he has Asperger's.

That revelation turns out to be the key to everything for Biel. Suddenly, everything in his life up to that point makes sense: why his marriage failed; why his relationships tend to crumble; how he might have mismanaged his business. Instead of functioning as a devastating blow, though, the diagnosis helps Biel to start anew. As he writes in his memoir, Biel's Asperger's diagnosis put him on the path toward "creating a new and conscious future." The rest of the book—which is fittingly subtitled Building a Successful Life & Business with Asperger's—looks at how Biel lived his life both before and after his diagnosis, and how that key therapy session from when he was 30 years old and down on his luck has informed everything he's done since.

A pointed and personal memoir, Good Trouble also functions as an exploration of what Asperger's is and what people who have it are like. It's one thing to read Simon Baron-Cohen's four definitive traits of Asperger's syndrome online and think you comprehend what they mean; it's another entirely to read as Biel applies each of those traits to his own life and behavior. Those sections are a reminder that, if the general public is ever going to ditch the stigma attached to Asperger's or other neurological disorders, it's probably going to be because of art like this. Because in the pages of Good Trouble, Joe Biel is just another normal person, working his way through life. His brain just happens to work a bit differently than yours or mine.

Good Trouble: Building a Successful Life & Business with Asperger's was published in March by Biel's own Microcosm Publishing. You can find the book on the Microcosm website or on Amazon.com.