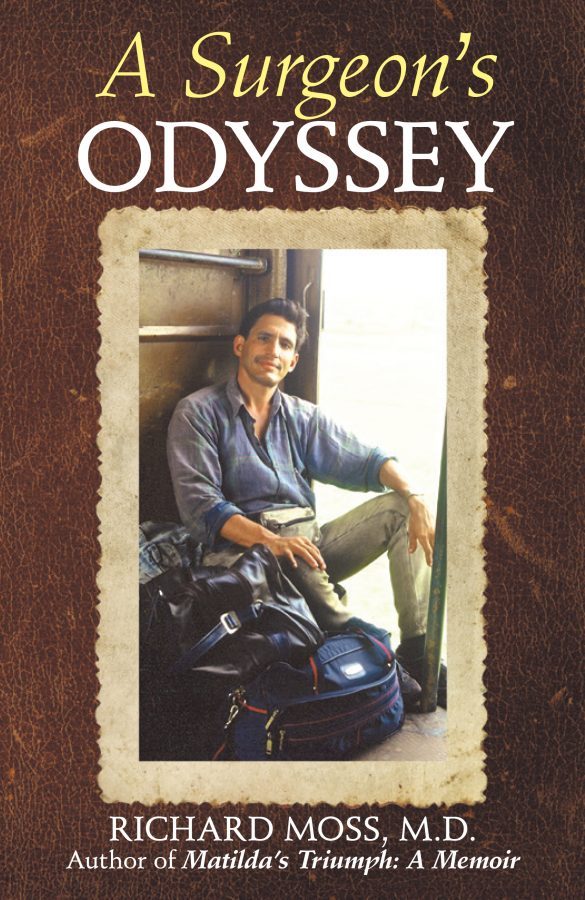 How many of us would forsake opportunities for gainful employment and leave the world we know behind to chase a wild dream? This question is one that readers will find themselves grappling in the first few pages of A Surgeon’s Odyssey, a fascinating new memoir from Indiana-based otolaryngologist Dr. Richard Moss. The book tells the story of Moss’s unique career path, which began in the late 1980s in Thailand and took him deep into the heart of third world medicine.

As the story goes, Moss was at a crossroads in his life. He’d just finished a decade-plus journey to become a doctor, including four years of undergraduate education, four years of medical school, and five years of medical residency. Finally, after so much time, Moss was ready to start practicing as an ear, nose, and throat surgeon (or ENT). He knew what the conventional path was: start a practice, settle down, and start making back the money he’s been spending on education for 13 years. But he had another dream: leave his home behind and take his talents to third world Asia, a part of the planet where he thought he could do an immense amount of good. He wanted, as he writes in the book, to be the “Indiana Jones of Otolaryngology.”

When greeted with this kind of fork in the road, most people would take the safer path. This point is probably doubly true today, considering the amount of debt that even an undergraduate college student has to carry—let alone a medical school graduate. But a strong case of wanderlust, an intriguing offer from a hospital in Thailand, and some cosmic interference—in the form of a very timely fortune cookie missive—ultimately convinces Moss to throw caution to the wind and take his own Indiana Jones adventure.

There’s a reason that Moss gives his book the title A Surgeon’s Odyssey, likening the tale to a piece of epic Greek poetry. The story that plays out in these pages truly is epic, taking Moss far from home in more ways than just geography. Once in Thailand—and later, Nepal, India, and Bangladesh—Moss falls deep into the embrace of foreign culture, religion, and way of life. The book is more than just a case study about a doctor studying abroad—though it does have aspects of that. Instead, the core thematic drive of A Surgeon’s Odyssey is often the internal journey and growth that Moss experiences along the way. The memoir only focuses on three years of his life, but they make him a fundamentally different person. Throughout, Moss invites readers into his heart and mind, welcoming us to experience a different world along with him. The result, buoyed by Moss’s nuanced recollections and sharp sense of self-reflection—is deeply transportive and affecting.

Perhaps the most fascinating aspect of A Surgeon’s Odyssey, though, is the glimpse into third world medicine. Much has been said and written in recent years decrying the state of the healthcare industry in the United States. Certainly, costs here are high and the doctor-patient relationship has been fundamentally altered by insurance companies, the opioid crisis, litigation, and regulation. Still, to read about the conditions that Moss worked under during his three-year journey abroad is to understand how much we take for granted. In one cringe-inducing scene, Moss works to repair a patient’s crushed forehead at the end of what has already been a long, tough day. The anesthesiologists have gone home, so Moss has to operate with the patient awake and alert. There is also no neurosurgeon in the hospital, either, which means if Moss makes a mistake around the brain, it’s game over. To make matters worse, Moss is working with shoddy equipment, including an ancient, heavy, and slow-as-molasses drill that offers “all the precision of a jackhammer.” The scene lasts only four pages—and it has a happy ending—but it feels like an eternity. It’s a reminder that things as simple as anesthetic and proper surgical equipment are luxuries that many parts of the world don’t have.

Similar reminders come over and over again in these pages, as Moss contends with horrific defects, massive cancerous tumors, and other jaw-dropping medical challenges. The cases he experiences throughout this story will seem unimaginable to most of the people who read the book, whether because of the extent and horror of the diseases or the primitive means he had of treating them. The journey becomes an extremely eye-opening one for readers, because it forces us to reckon with the tragedy and danger that comes with living in a part of the world that lacks the means we have in the United States. And while Moss saves lives and makes a difference, he ultimately posits that the inherent challenges of third world medicine are so vast that they cannot be solved by any level of volunteer action or foreign aid. “The answers existed on a far deeper plane,” he writes, “on the level of culture, morality, religion, history, economics, science, and political philosophy.” The book seems to ask, “How do you fix a problem that your worldview has made you virtually incapable of understanding?” It’s a question that will swirl around readers’ minds at the conclusion of this powerful memoir, lingering long after the final page has been flipped.

A Surgeon’s Odyssey was published by Archway Press and is available through the Archway website or on Amazon.com.