A New Collection of Illustrated Songs from LyricVerse and Akashic Books

Just out from the one of the world’s most independent and  “rock 'n roll” publishers, Akashic Books, is LyricPop, a fresh new series of children’s books meant to instill a love of music and song among young readers. Launched in June 2020, LyricPop presents classic song lyrics by renowned songwriters as illustrated picture books, delivering messages that parents, grandparents, and great-grandparents were inspired by when they were young.

Recognizing song lyrics as poetry is a growing trend, sparked by the Nobel Prize in Literature given to Bob Dylan in 2016 -- the first one for an American since Toni Morrison received it in 1993 -- and the first ever for a songwriter. The Swedish Academy said they chose Bob Dylan "for having created new poetic expressions within the great American song tradition."

Dylan had also received the Medal of Freedom from President Obama in 2012. "By the time he was 23, Bob's voice, with its weight, its unique, gravelly power was redefining not just what music sounded like, but the message it carried and how it made people feel," Obama said at the ceremony.

Music has long been used by movements seeking social change. In the 1960’s, "folk" musicians such as Dylan, Joan Baez and Pete Seeger used their songs to address the issues of the day. Black artists have long expressed their pain through song, notably Billie Holiday’s Strange Fruit (1939) which pre-dated the Civil Rights Movement but boldly placed the imagery of lynching front and center. Fast-forward 50 years to Public Enemy’s Fight the Power (1989), daring to call out Elvis and John Wayne as racists, and then on to today and the death of George Floyd, so poignantly eulogized in Usher’s brand new song, I Cry, which debuted on June 27th during the Global Goal: Unite for our Future concert live-streamed around the world.

We applaud Akashic Books for recognizing the poetic value of song, and for bringing these messages of peace, love, and independent thinking to our children, in a time when our society has reached a crossroads, and so many of us are crying out for mercy and hoping for real change.

I went down to the crossroads
Fell down on my knees
Ask the Lord above for mercy
Save me if you please – from Cross Road Blues, by Robert Johnson (1936)

“LyricPop represents two things I’m passionate about—music, and books for children,” said Johnny Temple, publisher of Akashic Books. “As both a musician and a publisher, I hope LyricPop will inspire parents, grandparents, and others to read (and even sing!) these books aloud with the children in their lives.”

Each book will be printed with a QR code linking to a curated playlist on Spotify, Amazon, and iTunes, allowing readers to take a deeper dive into the various musical styles. Other songs in the pipeline and scheduled for fall release include Respect, song lyrics by Otis Redding, These Boots are Made for Walkin’, song lyrics by Lee Hazelwood, and Humble and Kind, song lyrics by Lori McKenna.

Here are the first four releases: 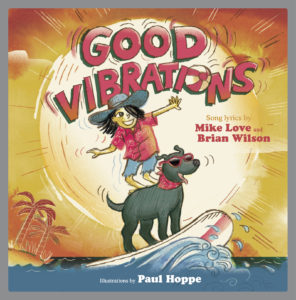 All about absorbing positive energy from the people around you, this picture book follows a girl and her dog as they make their way down to the beach, sharing good vibrations all along the way. 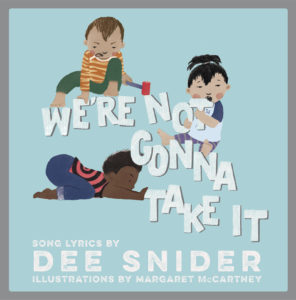 WE'RE NOT GONNA TAKE IT

A playful picture book echoing 1980s hair band Twisted Sister’s most popular anti-establishment anthem. Follow three toddlers on a mission to defy their parents, whether it be lunchtime, bath time, or bedtime.

We've got the right to choose and
There ain't no way we'll lose it
This is our life, this is our song
We'll fight the powers that be just
Don't pick our destiny, 'cause
You don't know us, you don't belong 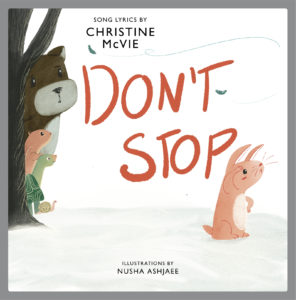 A beautifully illustrated picture book based on Christine McVie of Fleetwood Mac’s enduring anthem to optimism and patience, it imagines a rabbit willing her hibernating friends out of a long and dark winter and into joyous spring. 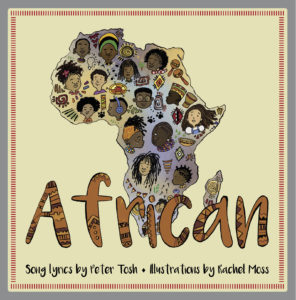 A beautiful children’s picture book featuring the lyrics of Tosh’s global classic celebrating people of African descent. He wrote the song during a time of civil unrest in Jamaica as a reminder to all black people that they were part of the same community.

Akashic Books is a Brooklyn-based independent publisher known for groundbreaking work such as the best-selling parody children’s book Go the F*ck to Sleep by Adam Mansbach; literary fiction by Booker Prize–winning authors Marlon James, Bernardine Evaristo, and Ben Okri; and the children’s picture book I Love You Too by musician Ziggy Marley.