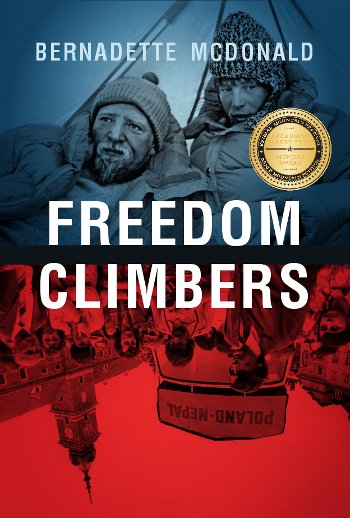 The opening pages of Bernadette McDonald’s masterful Freedom Climbers offer readers a brief detour into autobiographical territory. McDonald meets Wanda Rutiewicz, a strong-willed, charismatic figure of the “golden age” of Polish mountain climbing, and one who has reached the summit of eight of the world’s 8,000+ meter peaks. Bernadette and Wanda become fast friends, forgoing personal obligations to sit at a bar and talk all night, and we learn that Wanda is about to set out on an impossible quest: to climb the remaining six high-elevation mountains in a mere 18 months. It sounds reckless, suicidal even, but Wanda is as stubborn as she is tough, and who could doubt such a solid track record anyway? The two friends part ways, vowing to stay in touch once Wanda returns from climbing her ninth monster, but then McDonald twists the knife: Wanda will never return.

This scene, which forms the basis for both Freedom Climbers’ riveting prologue and McDonald’s spark of inspiration for the book as a whole, is an electric starting point. McDonald manages, in a mere three pages, to do what some authors never find the ability to do – build a palpable emotional bond between one of her chief characters and her audience. That gift is one that manifests itself throughout the entirety of Freedom Climbers, a book that charts the illustrious history of Polish mountaineering, highlighting key figures and achievements of the nation’s key era of Himalayan climbing.

Meanwhile, McDonald paints a portrait of the Poland her characters were thrust into, an isolated and war-torn nation with an oppressive government and massive economic adversity and upheaval at every turn. Out of the darkness sprung a climbing culture dominated by women and men who were strong enough to go against the odds. McDonald seamlessly weaves social and political commentary into her historical account, writing with a strong voice that never gets bogged down in technical terms or inaccessible scholarship. She opts instead for simplicity, creating a text that comes across as equal parts adventure novel and film documentary (over 60 pages of full-color photographs help evoke the latter), and one that is never less that thoroughly involving.

But despite her pitch-perfect research into the era’s historical background and her clear, deep-seated knowledge of the sport of mountain climbing, McDonald’s greatest gift remains her ability to tap into the complexities of her characters. Freedom Climbers is a versatile text, but it is at its strongest when it plays up the human drama at hand: nothing rings truer or hits harder than the euphoric triumphs or the crushing defeats these characters face along their respective arcs, from their first moments at the peak of Mount Everest to the very edge of doom. In between, McDonald paints them all as they are: mortals who faced down titans, yes, but mortals nonetheless, with flaws, egos, hopes, fears, and personal baggage just like the rest of us. The fact that McDonald never sells her heroes short speaks volumes about her presence as a writer, and suggests that, even if she lacked the specialized knowledge that has dominated her writing career thus far (she’s written seven books on international mountaineering), she would be an author to watch regardless.

Freedom Climbers is both a spellbinding historical document (of an era that has never been covered in the English language, no less) and a resonant tribute to the complexity, resilience, and innovative spirit of the human condition. For those with an interest in Himalayan climbing, it is undeniably essential, but McDonald aims higher than that here, tapping into themes that are far more universal, and constructing a book that is a recommended read for all.

“Once I began to know the characters, I knew that they were special and that their complexity and strength and uniqueness demanded that I at least try to convey just how special they were,” McDonald said. “I thought that their story transcended the mountaineering community and that it could speak to anyone interested in strong, creative people who are not beaten down by a system, by poverty, or by a country that doesn't respect big dreams.”

To learn more about Bernadette McDonald and Freedom Climbers, visit her website: www.bernadettemcdonald.ca