How to Win a Book Award

Behind the Cover - A Podcast 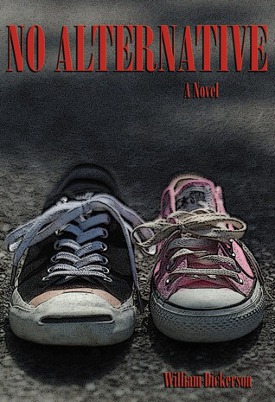 “From Sid Vicious to Kurt Cobain, Jim Jones to David Koresh, artists and psychopaths alike were immersed in the cumulative whirlpools of thought, aggression, freshly clipped nerve-endings, disaffection, and the do-it-yourself zeitgeist of the moment. Absolutely nothing is more do it yourself than suicide.”

So runs one of the most striking and memorable turns of prose that author William Dickerson adopts in his evocative first novel, No Alternative. The book itself is a nostalgic look back at what it meant to be a teenager in the 1990s, an examination of the kind of angst-fueled adolescence that was spurred on by the grunge revolution taking place on the radio.

Fittingly, No Alternative is thoroughly grounded in the musical moment, with sections of discussion in its narrative that blur the lines between creative writing and rock ‘n’ roll criticism. Furthermore, Dickerson positions his plot next to one of the decade’s key cultural moments: the suicide of Nirvana-frontman Kurt Cobain. Readers are greeted with a bizarre and jarring introduction that discusses the cerebral and universal idea of suicide, a rumination that winds its way towards a single pivotal artifact: a news release from April 8, 1994 announcing Cobain’s suicide. According to Dickerson, “if you were a teenager in the early 90s,” that was the day the music died.

But music wasn’t dead. Dickerson ends his introduction with the image of a spinning record, and that image evokes the ultimate spirit of his novel. The shadow of Cobain’s death hangs over many of the characters, especially 17-year old Thomas Harrison, who has not been able to play the drums since the day he heard the news. These teenagers search for answers in Cobain’s music, in the alienated rage of In Utero, Nirvana’s swan song, which released in the fall of the previous year, or in the ubiquitous hit songs from their musical peak, 1991’s Nevermind. But maybe finding answers isn’t what Thomas has in mind as he rallies his friends to start an alternative rock band of their own. Thomas is a prep school kid with a dark side: he goes out at night, gets high, trips on acid, and drinks beer, and it seems like his musical aspirations are no greater than to find chicks and get laid.

Adversely, his sister Bridget rejects the angry noise-rock that her brother adores, channeling her own dissatisfied depression and anxiety into hip hop, and more specifically, gangsta rap, another genre that was becoming prominent at the time. She calls herself “Bri Da B,” adopts “the persona of a well-endowed black man,” and begins performing around town.

The development of the two central characters and their musical ideals mirrors the evolution of the 90s music world: by the time Cobain died, his revolution was beginning to wear thin. The Seattle grunge scene, which at the time of Nevermind’s release had seemed unstoppable, mostly dried up and disappeared. On the airwaves, Britpop bands like Oasis and Blur became the next phase of rock ‘n’ roll, while grunge became little more than a signpost of the times. Meanwhile, hip hop and rap music became a sensation that would define mainstream music for the next 20 years, with early gangsta rap figures like 2Pac, the Notorious B.I.G., and N.W.A. paving the way for figures like Jay-Z and Dr. Dre, who remain industry players today. Dickerson knows all of this, of course, but it’s his encyclopedic knowledge and palpable passion for the music and the pop cultural zeitgest that stands as one of the book’s greatest assets.

No Alternative’s other asset is Dickerson’s knack for character development, which manifests itself from the first moments he spends with Thomas. The scene is simple: a teenage boy waking up, taking a shower, and getting ready for school, but Dickerson lays it out with nuanced details that give the audience a clear portrait of who this character is—all while maintaining the sort of detached atmosphere that the subject matter demands. Bridget is even more fascinating, morphing from Dickerson’s first impression of her as a potentially unstable figure into a commanding, fierce, and unique character whose arc defies all audience expectations and stereotypes. Elsewhere, Dickerson populates his world with people who feel real and distinct, from the Harrison parents to Thomas’s rag-tag band of buddies. Perhaps it’s because Dickerson is writing partially from experience (he experienced his own musically formative days following Cobain’s death), but his world always feels genuine.

All told, No Alternative is a beautifully written character study, using both the early/mid-90s music landscape and cultural climate as mirrors to thoroughly human experiences. From the alienated youth that Dickerson describes so effortlessly, to the examination of the tragic shockwaves Cobain’s suicide sent throughout the country in 1994, No Alternative feels both thoroughly nostalgic and remarkably of its time. Nevermind turned 20 last year, and between celebratory cover albums and deluxe reissues, many writers chose to dig down to the core, to figure out what that album and that band meant on a grander scale. Dickerson’s work is very much a piece of that retrospective, paying tribute to Nirvana and the grunge movement that they kickstarted, but also commending the forces that tore it down in order to move forward.

Above all else, Dickerson has called No Alternative a celebration of the do-it-yourself aesthetic, of individuals who rebel against the trends around them and stay true to themselves to create something truly groundbreaking. He finds that spirit in the strength of his central heroine, but he also finds it in the poetic independent publication of his introductory work. If his future material is as full of idiosyncratic life as No Alternative, then Dickerson will undoubtedly be a writer to follow.

Interested in reading No Alternative? Check it out on Amazon: http://www.amazon.com/No-Alternative-William-Dickerson/dp/0985188618/ref=sr_.