The Guitar & Amp Sourcebook: An Illustrated Collection of the Axes and Amps that Rocked Our World 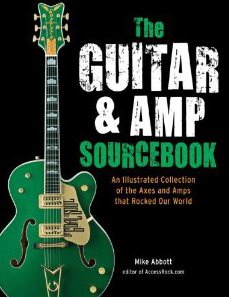 With the release of this book, all of us old rock 'n rollers and guitar geeks got a dandy Christmas present. Author Mike Abbott brings vast knowledge of the instruments and the players who used them, jamming the book with quotes, photos, and facts about early stars like Django Reinhardt and Charlie Christian to modern guitar gods like Dave Grohl and Jack White -- making it both a coffee table book and a pop-culture history book. The photography is clear and crisp and the layout and design are beautiful. Leafing through it brings a new delight with every page. And what a bargain at just 25 bucks!

So, put on some old rock music get lost in 450 pages of guitar heaven:

Author Mike Abbott is a professional guitarist who has performed with Burt Bacharach and Paul Schaffer, and he owns and edits a music website. His knowledge and love of these guitars and amps is evident, and as readers we're lucky that he's so obsessive -- this is truly an amazing collection, sure to help rockers of all ages get their ya-yas out.