Tasting Home: Coming of Age in the Kitchen 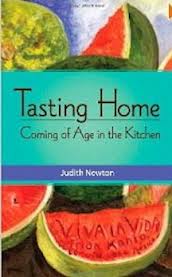 This is a baby-boomer's dream: a book full of anecdotes about coming of age in during the sexual revolution of the sixties -- with recipes! So many of us old hippies have become "foodies," putting the same energy we used to put into our sex, drugs and rock 'n' roll into our dinner, wine 'n' dessert, and this book is a mirror in which many will recognize themselves.

Judith Newton spent her life struggling to overcome a traumatic childhood incident that occurred in her mother's kitchen, and she never felt acceptance in that place where her mother created magical pies, fudge and other sweet concoctions. Ironically, it was those very sweets and fatty foods Judith used to soothe the pain and compound the misery by becoming overweight. She found solace in school, was a high-acheiving student, and finally escaped her unhappy home by leaving for college. It was the first step toward acheiving peace of mind and culinary expertise in her own kitchens and travels around the U.S. and abroad.

From winning the battle against childhood obesity to finding her way into sexuality and motherhood, Judith's evolution as a woman and academian is the quintessential American Girl saga, and the cities and universities of Stanford, Berkeley, Penn, and U.C. Davis play integral roles. The cookbooks she uses to help create a sense of home and family are also featured players: The Art of French Cooking; Time-Life's The Cooking of Italy; Moosewood Cookbook; Mark Miller's Coyote Cafe; and even Martha Stewart's Entertaining -- are all stepping stones on her pathway to becoming a fufilled woman and the first director of a university Women Studies program in the U.S. "Cooking, I realized, could become a thoughtful political practice, a means of instilling a common cause."

Like the butter in one of her mother's pies, the book is dotted with recipes, some sweet and simple, others dramatic and complicated -- this is a woman who takes her cooking very seriously -- and the dishes she describes are a vital part of the storytelling. Here's another quote:

Eating what is cooked and served with goodwill evokes one of our first experiences of being fed by another being. That is one reason that cooking and eating with others can heal the adult self, one reason that it can so easily make us feel connected to another person, a family, a culture, a political community.

Yes, she takes her politics seriously, too. Her alter ego is Frida Kahlo, the emotive Mexican artist and communist known for creating rich dishes and lavish table settings. The final chapter describes Judith and her seventeen year-old daughter together in the kitchen, preparing a huge, Kahlo-inspired dinner party, "cooking in the service of politics and love." The story finally comes full circle, with mother and daughter sharing the joy of cooking the way Judith and her own mother were never able to do.

This is an ingeniously conceived, tightly written, and beautifully packaged memoir, a vibrant portrait of the American fememine cultural experience from the 1950s forward. 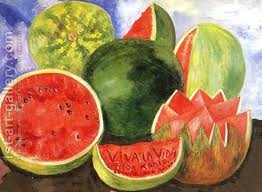