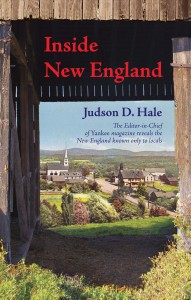 Review by Mary Claire Mahaney
Never having lived in New England—although I’ve vacationed there, supported a son in college there, even house-hunted there—I’ve never been a Yankee Magazine subscriber. But when I have run across the publication in a library or a doctor’s office, for example, I’ve always been impressed by the quality of its contents. Inside New England, a book by Judson D. Hale, editor-in-chief of both Yankee Magazine and The Old Farmer’s Almanac, reads the way you’d hope a friend would write you a letter: clearly, frankly, and with good humor. On almost every page of Inside New England I had to chuckle, and that’s a good thing in my book.
Six states comprise New England: Connecticut, Maine, Massachusetts, New Hampshire, Rhode Island, and Vermont, in perhaps the only non-contentious order one could list them. For even though the six states hang together as a group for purposes of being part of a region, each state has its own distinct character, and the states are not without their rivalries. Each of the states claims their state as the place the United States of America got its start. Moreover, New Hampshire thinks Vermont is an upside-down New Hampshire, and Vermont reciprocates about New Hampshire. Massachusetts knows it contains the gist of New England, namely Boston, and is therefore the Hub of the Universe. Connecticut (birthplace of Yankee Ingenuity), since the U.S. Patent Office opened, has often averaged more patents per year per thousand of population than any other state in the Union, or even any other country of the world. Rhode Island’s official name is The State of Rhode Island and the Providence Plantation, but in any case natives pronounce it “Ruh Dilan.” As for Maine, Judson writes, “Maine is beautiful and Maine is ugly,” and goes on from there.
Yankee humor is well known for its economy. Hale serves up dish after dish of tasty tidbits of comedy, some of which have to do with reader-contributed recipes that saw publication in Yankee Magazine but not testing in the magazine’s own kitchens. Hale says the last time the magazine failed to test a recipe before publication involved bran muffins that called for baking powder when the ingredient should have been baking soda. Hundreds of people wrote in to complain—the muffins were “compact little cakes of cement.”
In fact, Hale has a chapter on humor, although the entire book is laced with it. Naturally, jokes are often about outsiders, usually summer people.
"Nice little town, so old and quaint. But I suppose you have a lot of oddballs too.”
“Oh, yes, quite a few. You see ’em around. But they’re mostly gone after Labor Day.”“
And jokes about politics.
“How come you are a Republican?” the Texas Democrat asks the visiting Vermont native.
“I come from Vermont and my father was a Republican,” replies the Vermonter.
“Oh, I see,” says the Texas Democrat. “So I suppose if your father had been a horse thief, you would have been a horse thief too.”
“No,” says the Vermonter. “In that case I would have been a Democrat.”
And so on, as the reader rolls gently through the book.
From Hale I learned why what I consider “up the coast of Maine” is “Down East,” and, to boot, the farther north one goes out the coast, the farther down it is. I learned about New Englanders’ love for prepositions, exemplified in Hale’s recounting of a conversation with a friend from North Dakota. Hale begins:
“Our poetry editor is coming on from California tomorrow.”
“On what?”
“What do you mean, ‘on what’? I said Jean Burden, our poetry editor, is coming on from California. Flying as a matter of fact.”
“Oh, you mean she’s coming on a plane.”
“Is there any other way?”
“No, I mean you must have been referring to the plane when you said she was ‘coming on.’”
“I wasn’t referring to her mode of transportation at all.”
“Well, why did you say she was coming on something?”
“I didn’t. I just said…” and around and around we went.
That’s just for starters, but in my own region-speak, better you should read the book than I should continue to tell you about it. And given how much I enjoyed Hale’s Inside New England, I might just be taking out a subscription to Yankee Magazine.
Bauhan Publishing, Peterborough, NH 03458
http://www.bauhanpublishing.com/inside-new-england/