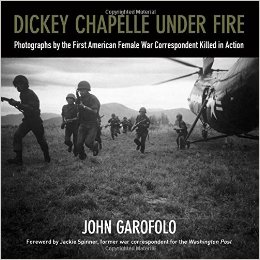 While reverently holding the weighty collection of photographs in John Garofolo’s book, Dickey Chapelle Under Fire, I innately turned the pages with a delicate hand, partially out of respect for Dicky Chapelle’s artistry with a camera, and partially out of respect for the sheer guts it took to be present to bear witness to the ravages of wars -- but mostly out of the same kind of respect she herself must of felt for the human condition she was recording.

The photograph on the book cover says it all. You can feel the tension of the presence of the enemy lurking right outside the edges of the photo, while a dozen brave soldiers run straight towards it off camera. But then one is forced to realize there is a woman standing behind a lens that caught that moment, while she herself was backing into the thick of that enemy. Dickey Chapelle brought much honor to herself while bringing honor to the men who valiantly took those steps into the face of death.

I felt tears welling up just reading the testimonials to her formidable legacy by her esteemed colleagues, in remembrance of a beautiful woman who broke down gender barriers and gave up her life to show the bits of “life that exist where death hovers.”

And yet only a small circle of fellow journalists and publishing colleagues would even know the name Dickey Chapelle. The minute dose of recognition she received during her lifetime pales to the scope and impact of the photographic legacy she left behind. For over two decades she went to war with a camera, from the shores of Iwo Jima during WWII to the jungles of Vietnam in the 1960’s -- with numerous so called “small” wars in between, embedding herself with military units on the front lines, documenting war’s rebels, freedom fighters, nurses and doctors, famine aid workers, and every branch of the American military -- though the marines were her favorite fighting force. “They taught me bone-deep the difference between a war correspondent and a girl reporter.” And the feeling was mutual -- they considered her “one of their own” -- even going so far as creating a memorial to her.

I do think there still was a piece of the “heart of the girl” expressed in many of the moments she chose to give homage too, whether it was the shot of a marine playfully dancing about with a group of school girls in Santa Domingo (page 92), or the demystifying photo of Castro in the jungle accompanied by the two most powerful woman in his life -- one looking bored and the other making a clown face at the camera (page75).

Yes, Chapelle was a woman whose rose up to meet the same challenges a man faces and sloshes through during wartime. She began in 1942 but as we have come to appreciate in 2015, each gender inevitably makes their own mark and brings “their own game” to the table. Thus showing a woman’s view through her photos makes her none the less powerful, only uniquely more-so.

With her snapshots she stopped time, suspending life for a millisecond. But the power of her images does not stop there. One can hear, see, and feel the scene that was taking place before and continued long after the click of her camera. (Such as the jovial exchanges I imagine went on between the two soldiers trying to rustle up some grub in a ditch on a makeshift grill made of the innards of a blood shipping case on Iwo Jima in 1945). That’s the real teeth and beauty of her work: Static pictures with the power of a living, breathing, moving memory. And she risked her own life in doing it almost every step of the way.

I am disappointed that there are only small snippets of details about her life included in the book. But then, her photographs are the main attraction, laid out in the manner of a one woman gallery showing, moving enough to leave me wanting to see more….and know more about her life. For that there is her autobiography, What’s a Woman Doing Here.

Dickey Chapelle Under Fireis a moving important legacy to Dickey Chapelle as well as the many men and woman who run head first into harm’s way in order to protect those present, those left behind, and humanity as a whole. I must say it was my honor to write this review, about a book -- and a woman -- whose creative life’s work was so passionate and so honorable.

Karen Chutsky is the author of The Boy from Tennessee: Young Davy Crockett; editor of Oji: Spy Girls at the Gate; and illustrator of Annabelle's Rescue. Reach her at karenchutsky (at) aol.com