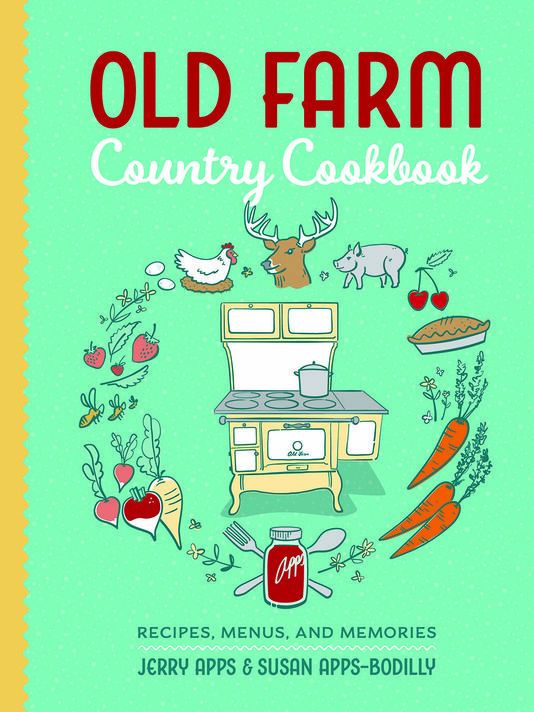 Review by Jim Barnes
The state of Wisconsin made news this past summer, searching for a new state slogan to replace “America’s Dairyland.” They came up with the humdrum, “Live Like You Mean It,” which sounds ridiculous, means nothing, and really makes you wonder: what was wrong with the original slogan? What’s wrong with celebrating “the good old days”? That’s why I love the books from Wisconsin Historical Society Press, and books by Jerry Apps, the prolific author and unofficial “storyteller laureate” of Wisconsin. Apps has written about and celebrated the natural beauty and agricultural heritage of his home state in 35+ books, with titles like Horsedrawn Days, Campfires and Loon Calls, Wisconsin Barns, and In a Pickle: A Family Farm Story. He grew up on a family farm, where they raised cows, chickens and pigs, grew their own veggies and even popcorn, made their own sauerkraut, and canned some of about everything, including chicken. Talk about farm-to-table…
Jerry may well have become a farmer himself, but being stricken with polio at age 12 altered his life path toward academia and authorship. Now he has collaborated with his daughter on this cookbook, based on his mother Eleanor App’s Depression-era recipe collection, a vintage wooden box filled with hand-written recipes, where “often in the top right corner is the name of a sister, a friend, or a neighbor who shared something of themselves by sharing a recipe.”
These words are from daughter Susan Apps-Bodilly’s introduction to the book. She also asks, “Why do I care about a pile of old, yellowed, food-stained cards? When I use Grandma App’s recipes, she is with me in the kitchen. She is still here.”  Susan notes that her grandma’s recipes include no mention of oven temperatures, nor do they mention of mixers or blenders. Since her grandmother cooked most of her life in a kitchen with no running water or electricity, she “knew the kind and amount of wood to use” in the wood-fired cookstove, and “she mixed, chopped, and stirred by hand.”
“Some folks say it was a simpler time. I don’t think so!” writes Susan. “I think these women worked very hard and were very smart to plan, prepare, and cook meals for their family and at times for large groups of men who helped the farm at harvesting time.” Susan has done today’s cooks a great service by updating the recipes for modern kitchens, doing the research and testing in order to designate measured amounts of ingredients, cooking temperatures and cooking times.
The first handful of recipes in the book include Buckwheat Pancakes, cooked in the iron skillet, Eleanor’s most important kitchen tool, and then Molasses Cookies, Cinnamon Rolls, Fried Doughnuts and White Bread, identifying some of the staples of the farm kitchen that got the day started. In chapters entitled “Making Do” and “Hunting for Game,” Apps describes the hardships of the Depression and WW II years, dealing with low farm commodity prices, drought conditions, rationing, etc. “Nothing was discarded in those days,” he recalls. “No morsel of food or item of clothing wasted.” This is the section where the penny-pinching recipes for Bread Pudding, Sugarless Cake Frosting, and Fried Squirrel appear. “When the war ended in 1945, great changes occurred on farms. Pa bought our first tractor. But he also kept our team of horses, as he never quite trusted a tractor to be as dependable as his faithful team. When sugar was again available for purchase, Ma bought two hundred pounds, storing a hundred pounds in our attic. ‘I don’t want to run out of sugar ever again,’ she said.”
With its charming gingham-cloth backgrounds, vintage family photographs, and a feast of storytelling about the times when “food was central to our lives,” and when “country folk did things differently, especially when it came to food and eating,” this book is a real treasure chest – just like Eleanor’s beat-up old recipe box.
Wisconsin Historical Society Press
www.WisconsinHistory.org/whspress/series-Jerry-Apps.asp
Paperback; $26.95
224 pages, 43 photos, 7x9
ISBN: 978-0-87020-830-0