A book like Breaking Free can be difficult to parse simply for how many different thematic directions it explores. One chapter may discuss travel and culture; another explores religion and spirituality; and a third may be a simple love story. However, Hickey was kind enough to share the “top five” lessons that he hopes readers will take from his book. From reminders of the bountiful opportunity that retired adults can still take advantage of to encouragements to find happiness in life, Hickey’s words rest largely in one overarching category: inspiration.

2. “Change is often a matter of visualizing who you want to be, and changing your location.”

3. “The world is divided into civilizations that focus on the individual and those that focus on the family. Greetings in the West ask, ‘What do you do for a living?’ In the Third World, they ask about family.”

4. “What Montaigne said of traveling: ‘The mind is constantly stimulated by observing new and unknown things. No propositions astonish me; no belief offends me, however much opposed to my own.’”

“My old life ended on the twenty-ninth floor of the Transamerica Pyramid,” author Denis Hickey writes at the outset of his epic two-part autobiographical book series, Breaking Free. It’s a terrific sentence, the kind of opening line that draws you in and makes you want to keep reading. It’s also nearly cinematic in its instant evocation of a time, place, and atmosphere. We zoom in on Hickey as he stands in a boardroom looking down on San Francisco, his back, as he says, to “thirty expensively suited men.” Hickey describes himself and his business partners as “the turnaround experts,” professionals who step in and help right the ship when a troubled company is reeling toward disaster. Except this meeting, in this particular scene, has very little to do with a business turnaround. Instead, it’s the impetus for a major life turnaround for the author himself.

Suddenly, Hickey realizes he is frozen and paralyzed, unable to go on with the meeting. It’s not a medical emergency. Rather, it’s a moment of mid-life crisis, an instantaneous realization that life is going too fast, its pleasures being forsaken for the unending grind of a successful professional work life. As Hickey stands unable to say a word to his clients, his business partner comes to the rescue. Later in the elevator, the colleague presses Hickey for details on his sudden break of sheeny professionalism. Hickey insists that he “just lost it,” but when asked to elaborate further, to explain the meaning of his momentary lapse in presence, our narrator delivers the moment of clarity that will kick his journey—and naturally, his book—into high gear.

“I think it means my life is never going to be the same.” 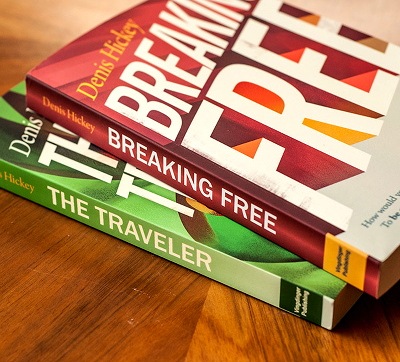 Over the course of two books, Breaking Free and The Traveler—both released in the summer of 2013 by Hickey’s own publishing start-up, Vingdinger Publishing—the author proves his prediction to be correct. Rather than ignore his moment of clarity, Hickey opts to take it as a sign that he needs to find more in his life than graphs, charts, and banking reports. He quits his job, plans a trip, and then takes off on the globetrotting adventure that occupies most of the Breaking Free series’ pages. It’s a big leap, especially for a successful business whose old life—the one that ended on the aforementioned twenty-ninth floor of San Francisco’s tallest skyscraper—would have looked damn near perfect to an outsider. However, according to Hickey, casting off the old in search of the new was something he sorely needed in his life.

“Just before I traded my Mercedes for a backpack, the many years of hard work, growing a family, increasing difficulties in marriage, and an incredibly fast pace of life sapped me of passion, driving me to seek a different life,” Hickey said.

Thus begins the act of “breaking free” that defines Hickey’s books, both physically and metaphorically. In March of 1993, with his wife of 25 years busying herself on a dissertation and his two daughters grown and graduated from college, Hickey jets off on what he intends as a year-long journey. However, just like his book—which ballooned from a single travel manifesto into a sprawling two-part autobiographical account—Hickey’s adventure and his life as a whole have plans of their own. Readers will quickly discover that Breaking Free and The Traveler are dynamic books packed with many different themes and angles. On one level, they are straightforward world travel guides, charting Hickey’s escapade as it takes him through Africa, Russia, Turkey, India, Thailand, Vietnam, Bali, and Australia. On another level, however—a more powerful level—they are portraits of a man (a “crisis management” professional, no less!) in a stirring crisis of his own. 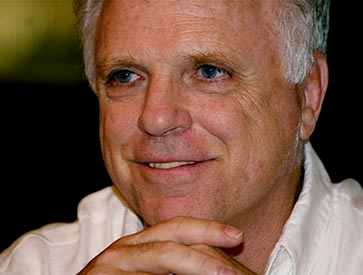 Indeed, Hickey’s own interior personal journey is often as enlightening and interesting to read about as his physical journey. In fact, more than a “travel” story, Hickey describes Breaking Free as a “love story,” one which finds him torn between his old life, represented by his wife of 25 years, and his new one, represented by the exotic younger woman he meets during his travels. Though Hickey has said that the ultimate divorce from his wife came amicably—during the year she spent traveling the world—he has also revealed how the dichotomy between his old family life and his new adventurous spirit often clashed, causing him to hold off on writing and publishing the Breaking Free books for many years.

“Telling the truth was difficult,” Hickey said. “One of the reasons I waited so long to publish was that an integral part of both books was about aspects of my family that might embarrass them. I had to be very careful how I talked about my ex-wife. We are still friends and have family and friends in common. Plus the subject of a younger woman is explosive. The truth for me is that the books included a love story involving two women: the woman I loved and was moving away from, and the woman I was moving toward. I found that story an extremely difficult and tricky one to write.”

Interested in hearing more about Hickey’s experiences? Both Breaking Free and The Traveler can be found on Amazon.com in paperback or eBook format.